in iT news, Business, E-commerce, Technology

Bitcoin was created by libertarian-minded programmers with a deep suspicion of central banks and the national currencies they issue.

Yet it is central banks that are doing some of the most ambitious work of late in trying to harness the technology introduced by Bitcoin.

The central bankers do not want their institutions to own or use Bitcoin itself. Instead, they hope they can use the decentralized method of record-keeping introduced by Bitcoin — known as the blockchain or distributed ledger — to complete and record transactions in the real economy more efficiently, quickly and transparently.

The most enthusiastic central banks — including the Bank of England and the People’s Bank of China — have discussed issuing their national currencies onto some sort of distributed ledger, a name that comes from the concept of several parties keeping records simultaneously.

Blockchains allow several different players to keep a shared spreadsheet using cryptography and so-called consensus mechanisms that provide a way to agree on which transactions happened at what time.

For the central banks, the promise of the technology is that it would allow them to track every pound or renminbi on every step of its travels through the financial system in real time — something that is impossible now. The goal would be to make the financial system more transparent, fast, efficient and secure.

The Bank of England has produced several research papers on the topic. One suggests that the economic benefits of issuing a digital currency on a distributed ledger could add as much as 3 percent to a country’s economic output, thanks to the efficiency it could offer.

A deputy governor at the People’s Bank of China, Fan Yifei, wrote for Bloomberg View that “the conditions are ripe for digital currencies, which can reduce operating costs, increase efficiency and enable a wide range of new applications.”

And in a speech on Friday, the Fed governor overseeing new technology, Lael Brainard, said the technology had the potential to transform multiple aspects of the financial system.

“We are paying close attention to distributed ledger technology, or blockchain, recognizing this may represent the most significant development in many years in payments, clearing and settlement,” Ms. Brainard said.

Even the central bank officials who are most enthusiastic about these experiments say it will be years before any central bank issues its own currency onto a live distributed ledger.

Some critics say the public interest in the blockchain has been all talk and no substance — an easy way for stuffy central bankers to appear hip and relevant.

David Andolfatto, a researcher at the Federal Reserve Bank of St. Louis, said many of the central banks looking at blockchain technology would be better served by spending time and energy in updating the current software that underlies the financial system.

“If you take a snapshot of the existing plumbing, it looks a bit ugly,” Mr. Andolfatto said. “There’s nothing magical about a blockchain in solving this problem.”

Even within the Fed, though, other researchers and officials have expressed more excitement about the technology.

A week before Ms. Brainard of the Fed gave her speech on distributed ledgers, the chairwoman of the Fed, Janet L. Yellen, was asked about the technology at a congressional hearing. She said that “innovation using these technologies could be extremely helpful and bring benefits to society.”

The Fed has been pushed to act by the big banks that it regulates, many of which are experimenting with distributed ledgers as a way to settle trades and record data and transactions. Just last week, JPMorgan Chase said it was moving toward a public release this year of its “enterprise grade” blockchain.

In the systems being discussed, each player in the system would communicate with all the others anytime money moved in the system, allowing everyone to update the ledgers on their computer systems simultaneously. This would provide multiple backups if the central bank’s computers came under attack. It would also hypothetically allow them to complete transactions much more quickly, and would make it easier to spot rogue actors.

Eric Piscini, who oversees work on blockchain by the consulting firm Deloitte, said that a year ago, central banks were looking at the technology mostly because they wanted to understand what private banks were talking about.

Now, he says, the central banks are embracing the technology to revamp their own infrastructures.

At the headquarters of the Netherlands’ central bank in Amsterdam, Ron Berndsen set up five laptops to run an experimental virtual currency, derived from the Bitcoin software. The coins issued in the system were nicknamed Dukatons, after a 17th-century silver coin used in the time when the Netherlands was a part of the Spanish Empire.

Mr. Berndsen operated the Dukaton system for three months to see what would happen if the central bank were setting the rules and did not have the same limits as Bitcoin. While the experiment was a success, he is now thinking much bigger and is in constant conversation with other central bank officials who are looking at ways to put their own currencies on distributed ledgers.

“There are so many things going on that it is hard to keep track of all the contacts,” said Mr. Berndsen, the head of market infrastructure at the Dutch central bank. “I hear from other central bank colleagues that it is the same everywhere.”

The experimentation so far has taken on many different forms and contemplated many different roles for distributed ledgers to play in the financial system. 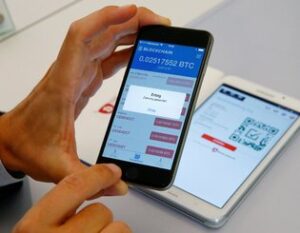 The Russian national bank said last week that it had worked with a consortium of Russia’s biggest banks to develop its own distributed ledger, which it dubbed Masterchain. The Russian institutions have been sending messages on the system but are also looking at it as a potential “component of the new-generation financial infrastructure in the future.”

The Bank of Canada teamed up with the nation’s five largest banks — and the blockchain consulting firm R3 — for what was known as Project Jasper. In a simulation run this summer, the central bank issued so-called CAD-Coins onto a blockchain similar to the one that underlies the Bitcoin alternative known as Ethereum.

The banks used the CAD-Coins to exchange money — in this case fictional money — the way they do at the end of each day to settle their master accounts.

Carolyn Wilkins, senior deputy governor of the Bank of Canada, said in an interview that while the experiment was a success, a great deal of testing is still necessary before the bank can decide whether distributed ledger technology is ready for the real world.

Critics of blockchain technology have noted the apparent contradiction in central banks’ looking to distributed ledgers.

The blockchain was created to allow Bitcoin transactions to be recorded communally so that a central authority, such as a central bank, would not be necessary. If a central bank is involved and keeping track, why go to the trouble of keeping records communally?

The distributed ledgers being discussed by central bankers also generally lack the openness that has been one of the most attractive attributes of the Bitcoin network.

With Bitcoin, anyone can join the network and help support it, which has helped it win a following. The distributed ledgers being considered by the financial industry and central banks would generally allow only a small number of registered entities to join in and take part in the network.

Mark Carney, the head of the Bank of England, and perhaps the most prominent champion of distributed ledgers, has said that the technology could be worth using for central banks because it would make for a financial system that does not go down even if the central bank’s computer systems are temporarily taken offline.

The Bank of England said last month that it wanted the next version of the bank’s basic software infrastructure to be compatible with distributed ledgers.

Ms. Wilkins said the Bank of Canada was interested in the technology as a way to build a single, shared record of all the transactions among several institutions. That could leave much less money sitting idle while banks reconcile their different ledgers, as now happens.

It would also create a standardized way of recording transactions that would allow all the players in the system to communicate more seamlessly.

“There is currently a whole industry set up to reconcile and audit all these separate ledgers, and you can’t easily connect them,” she said. “This comprehensive shared data source could be a real benefit.”