in iT news, Technology

The world’s most popular email service is getting a big overhaul today. Google is making official the changes we saw leaked earlier this month, with email snoozing, nudging, and confidential mode making their debut alongside a substantial visual redesign for Gmail on the web. The new Gmail begins a global phased rollout today, which is to say that it won’t be available to every one of Gmail’s 1.4 billion users right away, and the first to get it will be invited to opt in rather than being able to just turn it on themselves.

Speaking with The Verge ahead of today’s launch, Jacob Bank, lead product manager for Gmail, says that Google’s redesign was done with an eye on “making people safer and more productive.” Those sound like the priorities of business users, and there’s a distinct sense among the series of changes Google has made that we’re all going to be treated a lot more like Google’s business customers. Which is no bad thing.

The new confidential mode lets you set expiry dates for emails and prevent recipients from forwarding or copying them.

The safety pillar centers around a new confidential mode. This allows the sender to set an expiration date for a sensitive email or to revoke it entirely. Google makes it work by not sending the confidential content directly — you’re only sending a link to the content, which lives in your mailbox and is accessed by the recipient either via their Gmail account or, if they use another email service, https. In both cases, you, the sender, are in charge of how long the other party can access the message. You’re basically handing out a time-limited access license.

Integrated rights management (IRM) is one of a number of business-centric features making it into the new Gmail for everyone, allowing you to block the forwarding, copying, downloading, or printing of particular messages. It’s obviously not going to prevent deliberate data extraction from such emails, but Google believes there’s a wide range of circumstances where people accidentally or unwittingly share information with the wrong person, and that’s the problem the company hopes to ameliorate.

Two-factor authentication (2FA) on a per-message basis is also being added in under the umbrella of confidential mode. You can request that the recipient authenticate with a passcode received via text message before they’re able to open a confidential email.

Alas, as big a change as confidential mode and its ancillary IRM and 2FA facets are for the new Gmail, it seems like they won’t be ready straight away, with Google promising we’ll be able to start using the secure mode “in the coming weeks.” 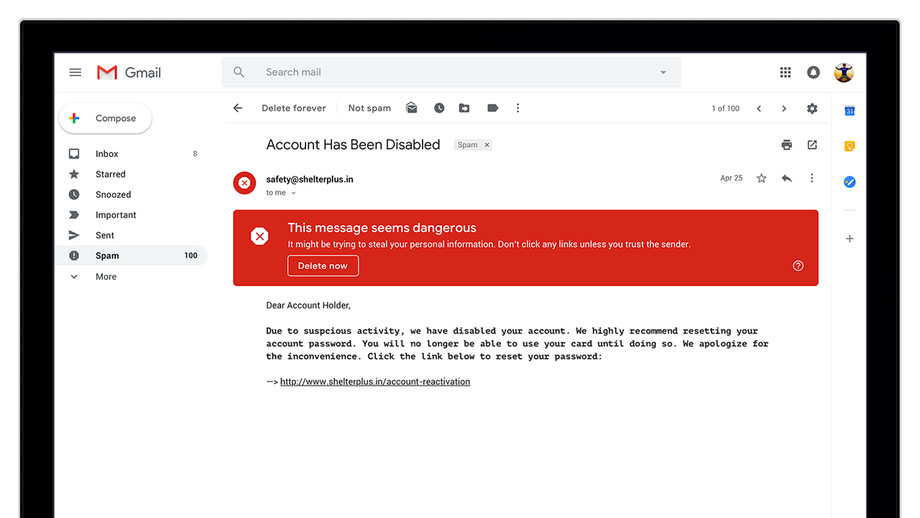 Google’s phishing warnings have grown in size and prominence.

Google is also touting some of the results of a behind-the-scenes security redesign focused on preventing phishing scams.

“We’ve increased our investment in phishing protection dramatically,” says Bank, explaining that Google’s machine-learning algorithms are running safety checks on every new message received. In terms of user-facing visuals, Google is ramping up its phishing warnings from basic banners to huge color-coded alerts. There’s now an unmissable call to action for the user when Gmail detects a potentially malicious or fraudulent message.

You can now snooze an email for later just by hovering over a message in the Gmail inbox.

Email snoozing is now a common feature among third-party email clients, and Google has done the obvious thing by integrating it directly into Gmail. It works nicely with a new hover menu that surfaces the most common interactions you might want with an email — archive, delete, mark as read, or snooze for later — as you place your cursor above each message in your inbox. It makes Gmail on the web look and feel a lot more like an app, though there’s no word as to whether the change might also show up in the mobile Gmail apps. Another neat addition to the web version is the ability to tap into email attachments directly from the inbox without opening up the conversation.

Google goes a step further by adding what it calls nudging of emails, resurfacing the ones that it recognizes require a time-sensitive action or response. “We don’t nudge very often,” points out Bank, “but when we do, it can save people from making a high-cost mistake.” To determine which messages require your attention, Google looks at a bunch of signals like who sent you an email and whether it has certain content. Queried about the privacy of this new feature, Bank explains that “it shares a lot of the same machinery” as Google’s Smart Reply options, which are now coming to Gmail on the web. 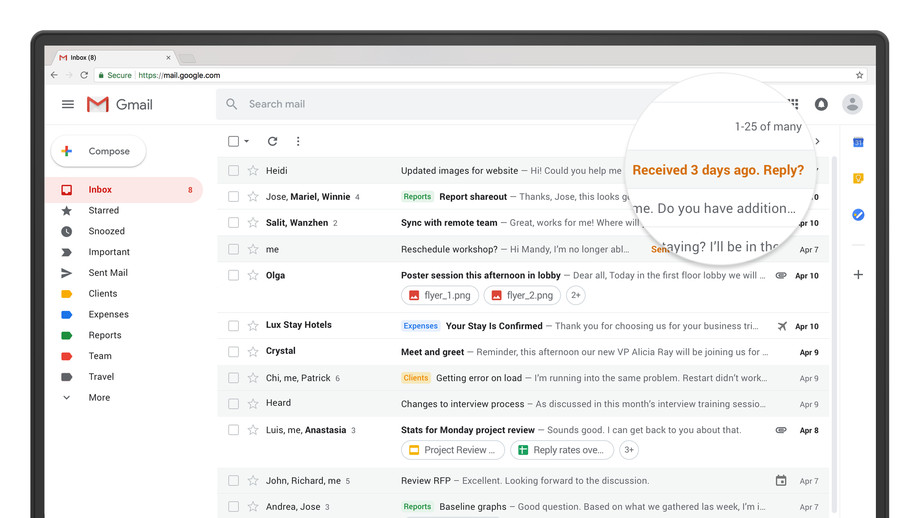 Snoozing, smart reply, attachments tappable from the inbox: these were all features that were already available in Google’s Inbox app. In a slight shift from how Inbox was characterized at launch, Bank says it now amounts to an experimental test bed for future Gmail features. “Inbox is the next-gen, early adopter version, whereas Gmail is the flagship that will eventually get the best new features,” according to Bank. “We don’t want to make changes frivolously, or with a lot of risk, with Gmail.” Google isn’t removing any Gmail features in this redesign, it’s all addition by addition.

Among a smattering of visual updates, the biggest functional UI change to Gmail on the web might be the addition of a new collapsible right-hand side panel. This aims to better integrate Google’s G Suite apps, with Google Calendar, Google Keep, and a new Google Tasks all finding a new home there. The side panel will let you organize meetings, plan out your day, or just scribble down a few notes without leaving an email to go into another tab or another app. A corresponding Google Tasks mobile app is being released on both iOS and Android today.

Google Calendar, Keep, and a new Tasks app find a home in the new side panel.

Also a first for Google’s web interface will be the ability to collapse the left-side panel that hosts the usual navigation links and thus open up more horizontal space.

“We have a bifurcated user base,” notes Bank. “The vast majority prefer a more comfortable display, but a small but vocal minority just wants to see as many emails as possible.” To satisfy both groups, one of the first settings Google will prompt new users to decide on is the vertical display density of their inbox. There are still only three settings: default, comfortable, and compact.

Also by popular request, Google has built a robust native offline mode. Users, especially business users who travel a lot, “want to be able to take their standard Gmail tab offline and work in the same UI,” says Bank. That’s what Google is giving them, though the reason it took so long to get there was not trivial. According to the Gmail product manager, “a rewrite of the entire technical stack of Gmail was required to make this possible.” 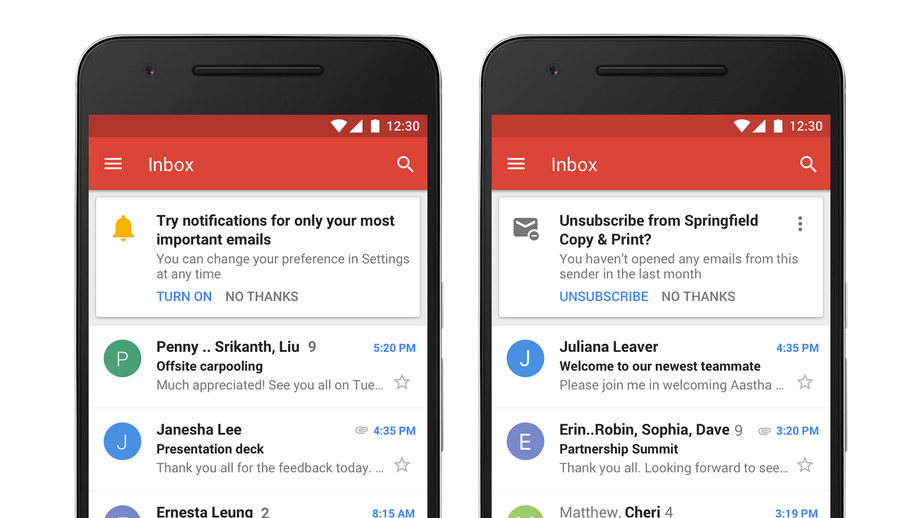 While the majority of Google’s overhaul is focused on Gmail on the web, the mobile apps are also getting an important change with the introduction of high-priority notifications. Already available in the mobile Inbox app, this is a feature where Google uses its AI systems to intelligently select which emails you’ll want to be notified about and which you can afford to look at later. According to Bank, this change has “cut 97 percent of email notifications for [Google’s] users.” That indicates it’s an ambitiously aggressive notification filter, and Google’s now apparently confident enough to offer it to everyone. Also helpful is the addition of a one-tap unsubscribe prompt in the mobile apps for things like newsletters you may have signed up for but haven’t read in weeks.

Taken as a whole, this is obviously the biggest set of changes that Google has ever made to Gmail in one fell swoop. The company has been cautious about alienating its enormous and enormously varied user base, and its alterations appear to be a collection of obvious / overdue improvements and logical extensions of the familiar Gmail service. The new look, which exhibits a lot of softer forms and pill-shaped buttons, will have to prove itself over time, but the new features already look like a promising change for the better.